Airo Antivirus is a young company, which debuted in the first half of 2019. It is purely designed as an antivirus for Mac, with no support planned for other operating software. It has a cool design, offers an anti-phishing browser extension, and scored excellently in the test by the independent labs.

Airo is good, but not the best

Since 2014, we have tested and compared antivirus software. Click the link to see the antivirus programs that we recommend the most. 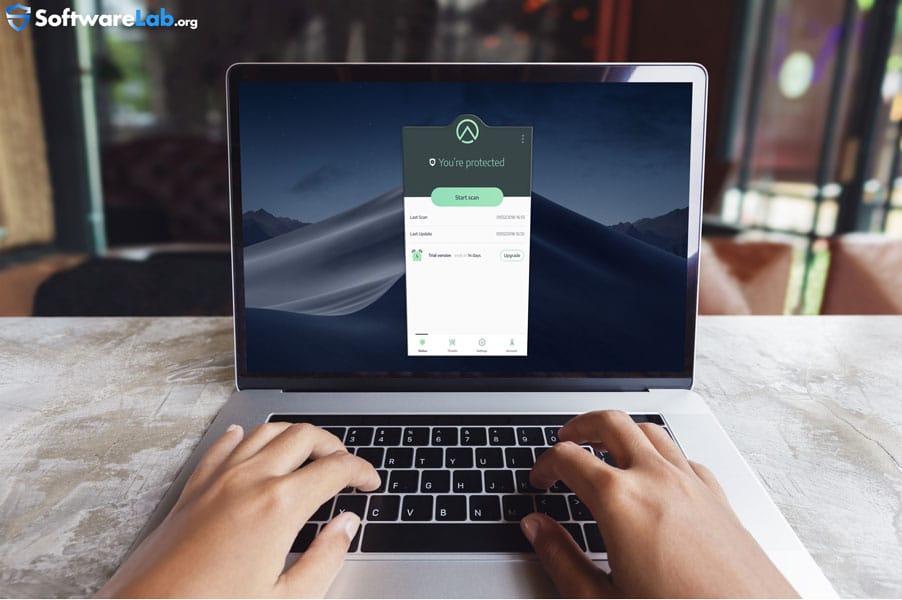 Have you seen the discounts?

Airo is a young antivirus, not to be confused with some older brands that have a full suite of tools. Besides Antivirus for Mac, Airo also makes a browser extension Airo Web Security. Below is a closer look at the features of these two products.

Initial versions of Airo Antivirus had no access to the entire hard disk, which means the system files were excluded. That left users exposed to potential threats that may lurk in system folders. That changed with the more recent updates, in which Airo included an option to give the antivirus access to system files.

Airo does an excellent job of protecting Mac systems from phishing scams and adware. It has quite an extensive list of websites identified as malicious and dangerous.

With respect to the antivirus technology, Airo relies on artificial intelligence to spot threats and predict new ones as they appear. Its Zero-Day Threat Detection offers a reasonable level of protection, though the jury is probably still out.

Finally, Airo offers advanced spyware and crypto-malware protection features. The former can scan not only websites for malicious software but also computer peripherals. The latter prevents hackers from stealing your computer’s resources to mine cryptocurrencies.

Airo Web Security, also known as Airo Web Guardian, is a lightweight browser extension. Its mission is to protect the user from online threats, and it can detect phishing scams and malware-infected sites.

Currently, the extension is available for Safari and Chrome. That covers most Mac users in the world.

The extension tracks all browser downloads and will notify the user if they accidentally downloaded malware with a file.

Airo is the company behind Airo Antivirus, one of the very few antiviruses dedicated to MacOS. It has offices in the United States and Israel, in San Diego and Tel Aviv respectively. The company’s stated goal is to become the number one choice for Mac users around the world.

The recent rise in malware threats to macOS systems opened up a niche for the company, which resulted in the release of Airo Antivirus, its first antivirus app. Thus far, is has been tested once by the independent test lab AV-Test.

The company also makes the Airo Web Security extension for Safari and Chrome. This is an anti-phishing browser extension that should keep you safe from visiting malicious websites.

As forecasted, Airo Antivirus achieved a stellar 100% success rate in the test. In light of its recency, this was even more impressive. It scored 6 out of 6 points.

The operating system used was the 64-bit macOS Mojave 10.14.6, the latest available at the time.

AV-Test tests antivirus suites in the three major categories: protection, performance, and usability. In performance, AV-Test examines the software’s impact on a device’s performance and speed in everyday use.

Airo performed to a high standard in this category as well, over and above many established competitors. Here’s a breakdown of the four performance categories.

The download speed test involved a set of 19 standard applications. On average, the top-performing antiviruses slowed the computer’s download speed by 1%.

In contrast, Airo Antivirus was hit with an average slowdown of 5%. While not atrocious, Airo’s score in this category was found wanting in comparison to the truly lightweight applications.

Antivirus and other antimalware programs had been infamous for slowing down computers in the past. The situation improved in recent years, though, to the extent that the best antiviruses of today wouldn’t make any difference to the normal usage of a computer.

The industry average in this category is a meager 3%. As for Airo, the average slowdown during application launch was tested at an above-average 2%. AV-Test went to the trouble of using 60 standard applications for the test.

It’s no secret that antiviruses can slow down a computer. That’s usually most obvious during the installation of certain applications. For this portion of the AV-Test Performance test for antiviruses, 19 common applications were used.

On average, the major antiviruses caused an 11% slowdown in program installation. Airo Antivirus once more scored above average at 10%.

File transfer speed is an essential metric in anybody’s definition of computer performance. Once again, antiviruses are guilty of significantly slowing things down in this regard.

However, huge strides have been made in recent years and the average antiviruses of today may only affect file transfer speed on a Mac by a relatively acceptable 6%. It was in this section that Airo Antivirus blew many competitors out of the water with a minuscule 1% slowdown. This portion of the test involved 4,271 files copied locally and in a network.

Overall, Airo scored better than average in three of the four categories of the performance test. It trailed only in application download speed. Even then, at a manageable 5% hit on download speed, chances are that most Mac users wouldn’t notice any difference.

As for the other three sections, Airo was particularly strong in terms of not slowing down file copying much at all (1%). In total, Airo Antivirus scored 6 out of 6 points in the Performance Test.